Crash Test Facility of the Year – Second Year in a Row!

Calspan’s $25M Vehicle Crash Test Facility, located in Buffalo, New York, is the first independent crash lab of its kind to be built in the U.S. in many years. This fully enclosed and highly secure facility was designed to facilitate new vehicle development and as such, has unique assets which are only found at major OEM facilities. Since it’s opening, Calspan has continued to invest in the facility, its people, and technology located within.

Calspan’s Senior Director of Vehicle Crash Testing, Gerald Goupil, shared why Calspan’s facility is desired by those developing new vehicles. “Our facility has unique and desirable assets, including MESSRING’sMicroTrack, Propulsion System, and its M=WALL high resolution load cell walls. However, our greatest asset is our people, who conduct these tests smoothly and efficiently.” Gerald went on to state, “We take great personal pride in working with our customers in both a flexible and collaborative manner. We understand the dynamic nature of vehicle development and as such are willing to work extended hours and weekends.” These capabilities and flexibility make Calspan the ideal choice also for those who build specialty vehicles and aftermarket components.

Calspan’s Vehicle Crash Test Facility has designated areas where transports directly offload vehicles within the facility, and each customer has their own private and secure vehicle preparation room. The facility also features plenty of space and vehicle lifts to support a test program, as well as a well-furnished customer room. Within the building there are two state-of-the-art crash halls, each equipped with a 6 m x 4 m (20 ft. long x 13 ft.) wide photo pit. This configuration allows frontal crashes to be carried out in one area, while side impact tests are executed almost simultaneously in the other. Being that this is a fully enclosed and climate controlled laboratory, its operations are not affected by weather unlike all other independent vehicle crash test labs within the U.S. This facility was also designed to accommodate all current test configurations and is already executing test protocols being proposed by regulatory bodies, including EuroNCAP’s moving deformable progressive barrier (MDPB), as well as NHTSA’s Frontal Oblique. 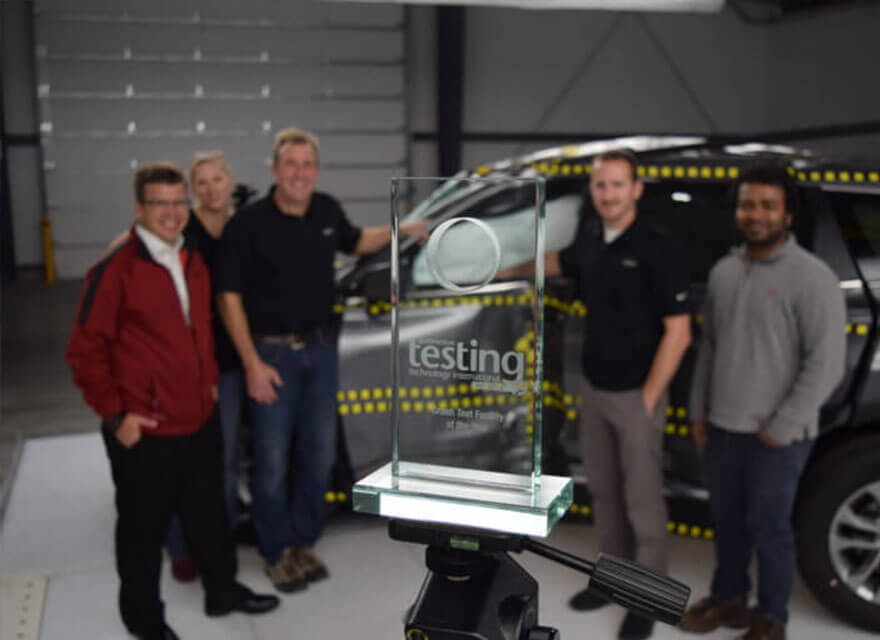